Most Incredible Apple Knockoffs of 2010

If you are a reader of M.I.C. Gadget, you probably love to see Apple knockoffs. Throughout the year, we have introduced numerous of fake Apple products, and most of them are incredible in many ways. We have a scary waterproof iPhone 4 knockoff, a MacBook Air knockoff with glowing Apple logo, and even an iPad mini wannabe! They are very attractive, and we would like to show you all the best Apple knockoffs in this super round-up post, just read on to catch up with us! Oh, beware one more thing: Steve Jobs wannabe.

The MacBook Air knockoff we reviewed could be one of the seven wonders of the world. It comes in white or black color, and it’s almost as slim as the original. Performance is not satisfactory, since it packs the specs and configuration of a netbook. It features a real glowing Apple logo on its lid, and comes in 3 sizes — 11.6-inch, 13.3-inch and 14.1-inch!

iPad knockoff. We’ve introduced countless of models, ranging from 7-inches to 10-inches. They all look like the real thing, and all of them come with Android OS. These fake iPads have one thing in common, cheap. They cost cheaper than the original, most of the models are half the price of a 16GB Wi-Fi iPad. However, don’t expect good performance. There’s no multitouch, and battery life is terrible. Anyway, it’s still worth to grab one if you just want to experience a geeky life with a tablet.

Ok, you got a real iPad and now what? Well, congratulations and you must grab a Camera Connection Kit which allows you to plug in your camera’s USB cable or SD card, allowing you to offload your pictures and upload them to Flickr or Facebook or wherever your heart takes you. Instead of getting the silly two adapters from Apple, it’s highly recommended to buy unofficial kits which combine all functions into one adapter. There’s 2-in-1, 3-in-1, and 5-in-1, depending on what functions you need.

Surprisingly, there’s a knockoff for Apple iPad case! Although the fake looks similar to the original, but there are some defects on it, such as poor interior material and not fitting an iPad closely. Lots of online retail stores on Taobao (the “eBay China”) are selling it as original.

All-in-one PC might become another important knockoff production. In term of its screen size, the manufacturers are offering 15.6-inches (1366×768), 18.5-inches and 21.5-inches versions. Well, we don’t expect it is powerful, but this iMac knockoff in Shenzhen is at least sufficient for web browsing and some other entry-level tasks. Yeah, it looks like Apple’s white iMac, seriously good looking.

Apple’s new Mac mini has arrived, and the knockoff makers now use the old form factor to build a knockoff version. This Ion-based box is not as powerful as the original, but you might be interested with its name, the Pandora Mini Mac. Nice.

The knockoff makers are always bringing us some surprises and here are two extraordinary fake Apple gadgets.

The white MacBook is a classic from Apple, and we have a knockoff for that in China. It looks like the original, but with less speed, power, and battery life. However, there’s one thing to love, the cheapest model starts from $1999 Chinese yuan (about $290). The high-end model has three awesome features: A built-in DVD optical drive, dual batteries, and Nvidia ION 2.

Don’t tell me how powerful your MacBook Pro is. I could not afford to get one, but I would consider this Chinese MacBook Pro knockoff, the QT Pro. Featuring NVIDIA’s Ion 2 graphics technology for 1080p playback and includes a big sealed-in battery, taking up almost fifty percent of the available space in the laptop and runs Mac OS X (maybe), it’s a must-see product in the big family of Apple knockoffs.

Dear Apple fanboys, you got to meet QingTing, a Chinese company that copies Apple’s products and website. They have MacBook Pro, iMac, iPad knockoffs which look just like the real stuff. What’s more, they even ripped off Apple wholesale and copied Apple’s website by ’stealing’ the product shots without any approvals from Apple. Luckily, they removed all Apple logos and trademarks.

The new multitouch iPod Nano was made to be strapped to a watch band. It’s cool and the knockoff makers now present us a similar thing, a tiny shanzhai iPhone which you can wear it as a WATCH. Cool.

There are lots of iPhone 4 knockoffs in China, and all of them look similar to Apple’s iPhone 4. We got one for a review, and it’s really built to look like a real iPhone 4 while doing its best — with features like a front-facing camera with flash, removable battery, and that outrageous imitation of the industrial design, no one would say that it is not cool. What’s more, there are some impressive models which copied the entire UI of iOS, runs Android or even dual OS!

The white iPhone 4 is too beautiful to describe, and the knockoff makers have cloned it today for those Apple fans who want an white iPhone 4 badly. Not only it does look like the original (does it exists??), things turn out magical if you put into a basin of water. Yeah, there’s a model which is waterproof.

By just a few concept shots of the iPhone 5 on the internet, those knockoff makers already produced one looks like it. Wouldn’t be interesting to get an iPhone 5 wannabe while some people still think of getting an iPhone 4? You must click in to read more! 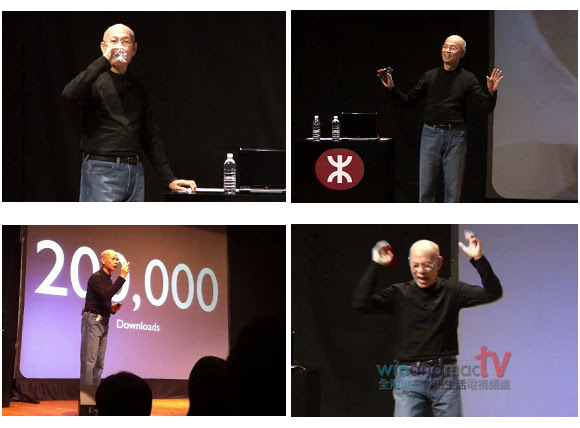 Apple fanboys, behold the secret knockoff of Steve Jobs in Hong Kong. Wearing the same blue jeans plus black turtle neck, this Steve Jobs knockoff got himself a keynote introducing an app, and he is telling us he could be Steve Jobs someday. He also loves to say “Amazing” and “Unbelievable”, and one more thing. We have lots of videos to show you in this post.