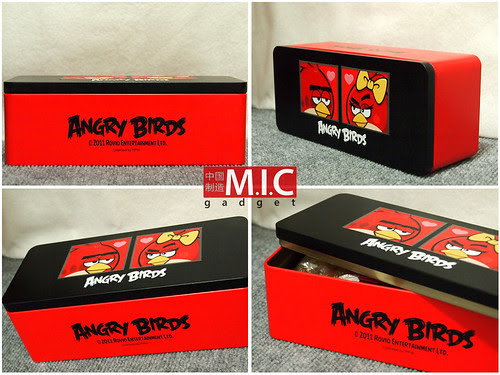 Guess what? Rovio Mobile has its own bakery products in China — the bird-shaped mooncakes (pictured above). These Angry Birds mooncakes are specially made to celebrate the Chinese Mid-Autumn festival — a holiday for members of a family to get together wherever it is possible.

So how does a mooncake tastes like? Well, we have a video showing one of our colleagues trying her mouth on every kind of Angry Birds mooncakes, after the break.

The Mid-Autumn festival (also called the Moon festival) falls on September 12th in the year 2011. On this day, when the moon is at its maximum brightness, the Chinese people would invite friends and relatives to hold family reunion feasts for celebration at the night of the Moon Festival. They sit together to eat mooncakes, appreciate the bright full moon, celebrate the bumper harvest and enjoy the family love and happiness. To the Chinese people, the full moon symbolizes family reunion, so do the mooncakes.

What’s so special with the mooncakes?

The mooncake is actually a kind of cookie filled with lotus seed paste (the traditional one) or other types of filling (the snowy type), surrounded by a relatively thin (2–3 mm) crust and may contain yolks from salted duck eggs. Sounds kind of weird? Lotus seed paste and egg yolks? It’s actually not bad (especially the yolk part) and when enjoy with a cup of tea, it’s a nice light breakfast or afternoon snack. How big is it? It’s roughly the size of an Apple TV. Mooncakes are quite filling, so they are meant to be cut diagonally in quarters and passed around. At the Moon Festival, people eat mooncakes to express their homesickness and love for their family member, and their hope for a bumper harvest and a happy life. Nowadays, mooncakes with their various flavors and delicate packaging actually have become a kind of artwork. And here we have the Angry Birds mooncake!
>>>> Hands-on with Angry Birds Mooncake (on Flickr)
Unboxing

First, the traditional Angry Birds mooncakes are packed in a nice tin box. 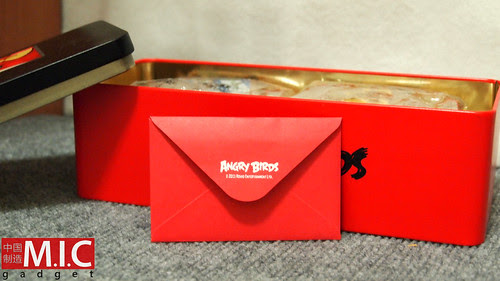 Opening the tin box, we see a small red envelope. 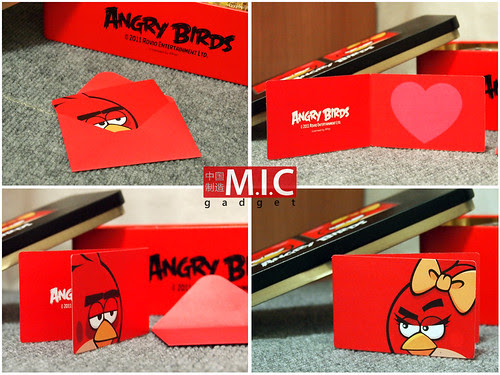 Since the Moon Festival symbolizes the reunions of families and couples, the exchanging of gifts during the festival is one of the hospitable custom and lovers would also give moon cakes as presents to show their passions. With this greetings card included, it would be a perfect greeting for your love ones. 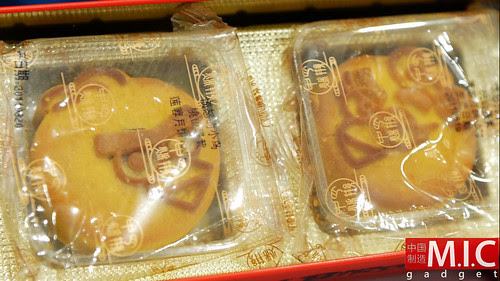 Here’s the traditional mooncakes! So cute! 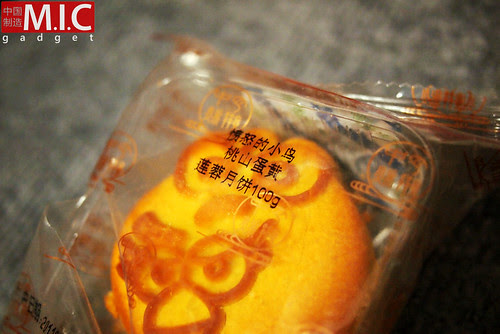 It says “lotus bean paste and egg filling” on its packaging. 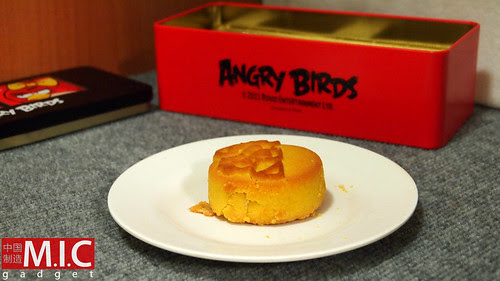 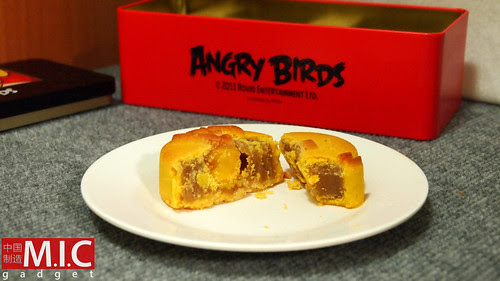 How does it taste? Well, it tastes awful, doesn’t taste like the mooncakes we usually eat in Hong Kong. In Hong Kong, there’s a lot of top-class bakeries that make top-quality mooncakes and Chinese pastries. See the video below, showing a well-known bakery in Hong Kong promoting its mooncake through TV ad.

Anyway, we still tried to eat this traditional Angry Birds mooncake. However, we couldn’t unhinge our jaws to get the entire mooncake into our mouth at once. The best way, we found, was to eat it like an ice cream sundae; by hacking away at its sides with a fork. And we drank 7 cups of water to swallow the pieces of the mooncake. It’s really a bad experience…

The Snowy Mooncake (made in Hong Kong) 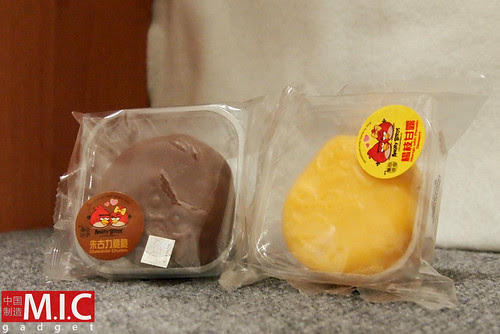 Made-in-Hong Kong. Great. What’s a snowy mooncake? Well, just imagine the traditional one getting frozen. Snowy mooncakes are really nothing new in Hong Kong. They were introduce in the 90s and have became more and more popular, especially among the younger demographics. Unlike traditional mooncakes, snowy mooncakes are meant to be eaten cold and stored in the freezer. The cakes do need to be slightly thaw at room temperature for about 10 minutes before serving. They also come in a variety of flavors. Coffee, mango, strawberry, green tea, and the list goes on. The ones pictured above are from Maxim’s, a well-known bakery & food restaurant chain in Hong Kong. 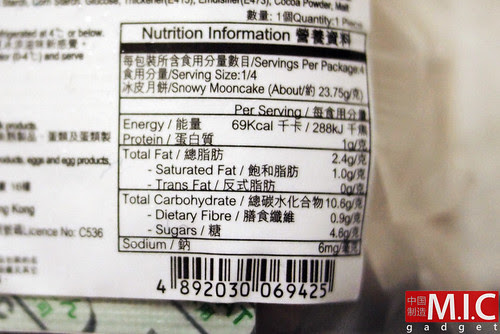 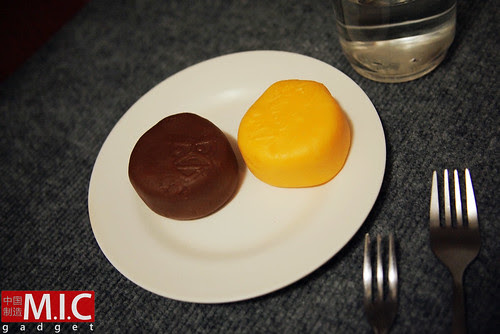 We simply love them! I can eat one…wait two…in one seating. 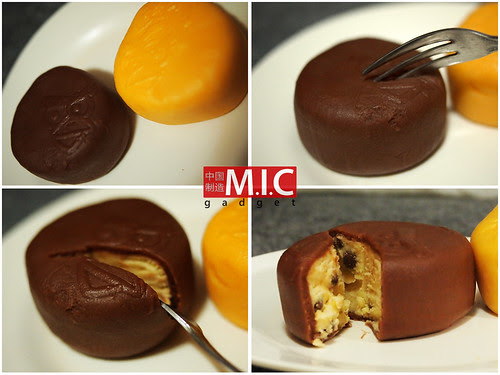 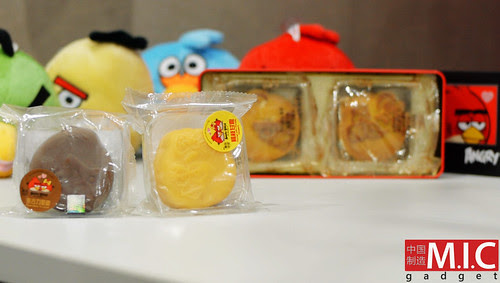 Mooncakes are a long-standing institution in China, and are generally offered in increasingly elaborate packaging. There are hundreds of varieties of mooncakes on sale a month before the arrival of the Moon Festival every year. Chinese people love to get these mooncakes as gifts for friends, relatives, and even business partners. Since Angry Birds is now a very popular game in China, and there’s 900 million Chinese mobile users, Rovio will not miss this chance to step into the Chinese market with mooncakes and “Moon Festival” episode for Angry Birds Season. For the traditional Angry Birds mooncakes, they are available from Rovio’s official parter on Taobao Mall for 98 yuan ($15). The snowy version sells at HK$38 ($5) per pair, and it’s only available at the Hong Kong Food Expo that was held last month in Hong Kong. The snowy Angry Birds mooncakes were immediately snapped up by fans when they are launched. So, our only concern now is, do we have to wait until next year for an Angry Birds mooncake feast?

p.s. Do you like mooncakes? Have you ever tried them before? Before you try, you need to know that a mooncake contains 700-800 calories, while McDonald’s Big Mac contains 540 calories.
Share this
Newer Post Older Post Home