The Perfect Photo Gallery On The Opening of HK Apple Store 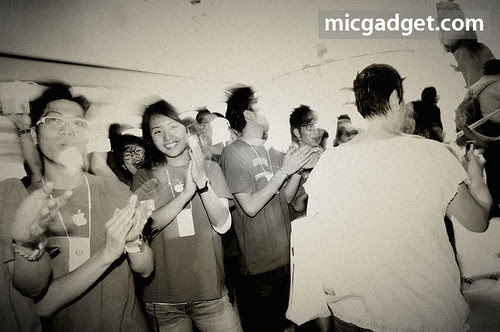 The very first Apple store has finally landed in Hong Kong. The store was opened on Saturday and we had attended the opening ceremony.

Thousands of fans have poured in, enthusiasts had camped out over 30 hours to secure a place at the head of the line and be among the first to walk-in to the first Apple store in town. They were greeted with high fives and chants of ” Apple, Apple ! ” by the blue shirt employees. We had a live coverage report yesterday, and we had captured all the special moment and behind the scene, photo gallery after the break ! 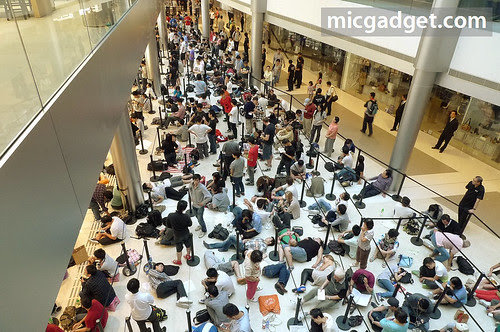 We arrived at the spot at around 7:30 am morning, most of the queue up customer were sleeping on the floor, waiting for the opening of the new store. 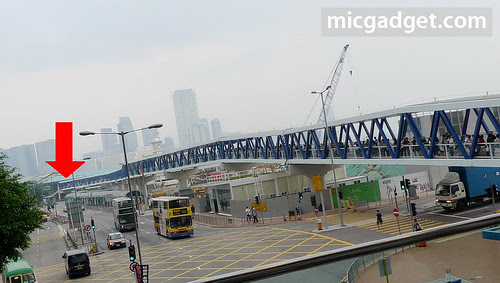 The line up had already snaked out the shopping mall and over a long footbridge to nearby ferry piers. The arrow shows the end of the queue. 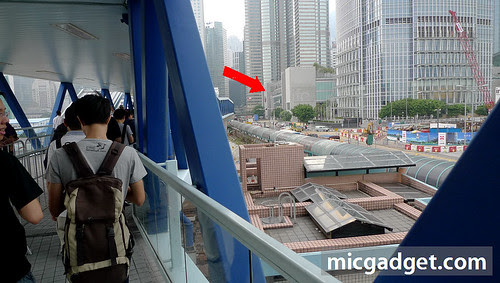 Here we are at the ending spot of the long queue, the arrow shows the new Apple store location. We think the distance is about one kilometer away! 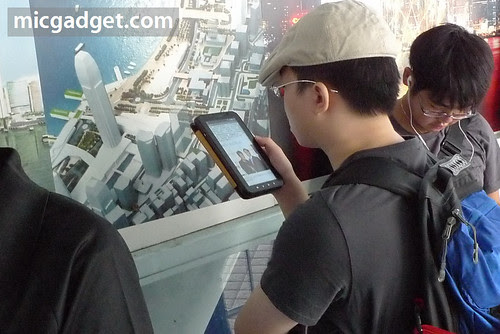 One of the line-up customer was using an Andriod tablet! We think Apple should really realease a 7 inch version of iPad. 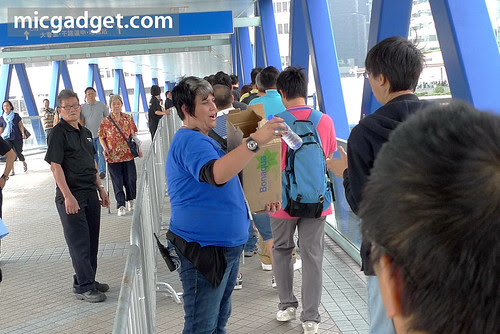 Apple employee were giving free water for every waiting customer. It will be better for Apple to give free breakfast for everyone! Outside the line-up, local mobile telephony provider were promoting their latest monthly plan for iPhone user, to take advantage of Apple customer. 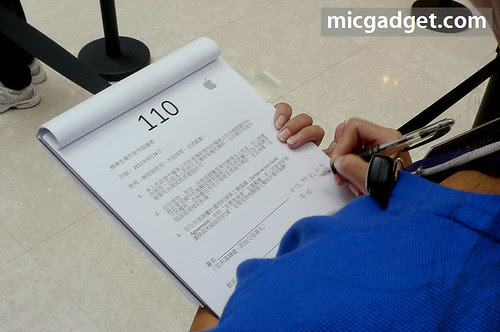 Apple employee want HK customer to sign up a ‘Screen Actors Guild Agreement’, so Apple can use their portrait as advertising material. Shanghai new Apple store opening had done this too. 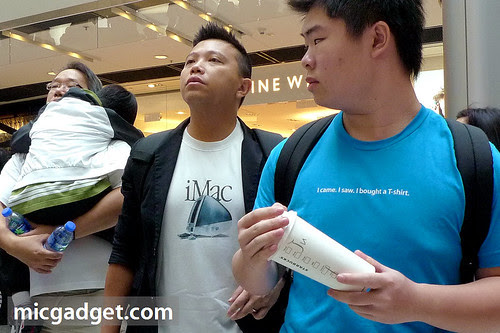 A classic Apple T-shirt vs. the unique slogan tees.
. 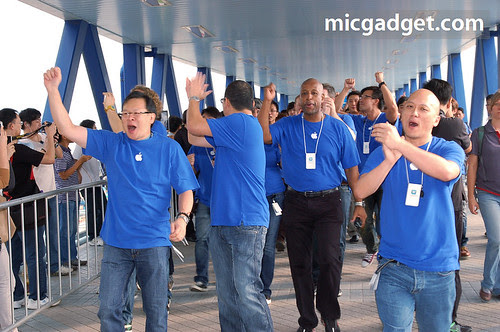 The Apple’s blue T-shirt gang were cheering for the waiting customer.
. 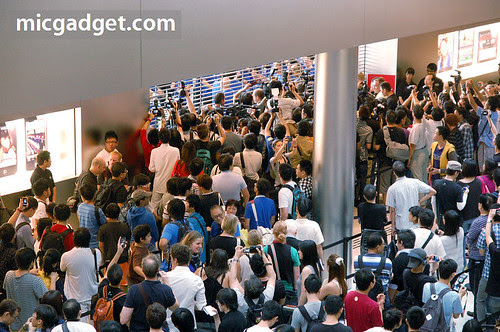 The new store opened at 9am. At 8:45am, the local media and waiting customer squash out each other at the entrance gate! 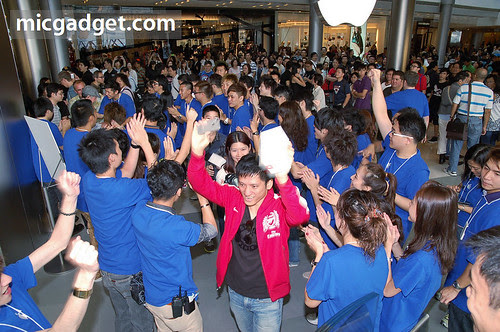 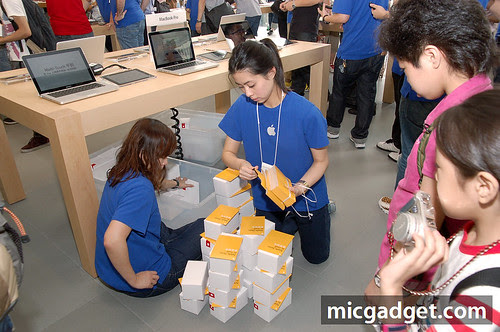 Apple employees were busy packing the souvenir T-shirt for the first 5,000 customer.
. 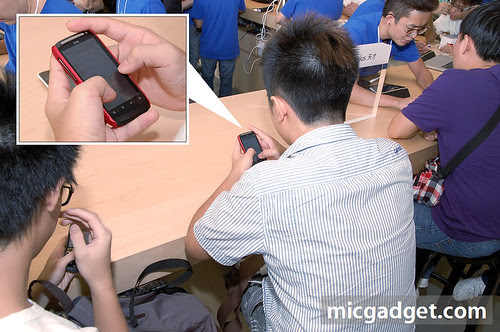 At the Genius bar, one of the customer was using HTC Andriod phone, we think that he won’t get any expert advice from Apple ! 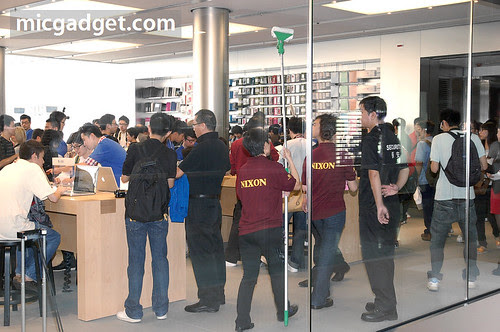 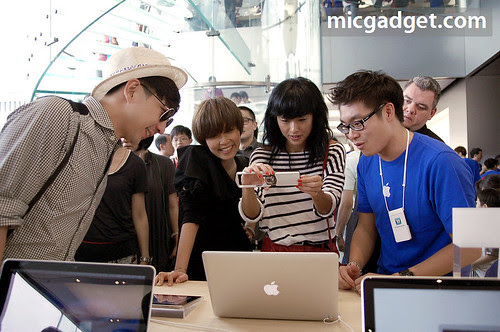 Local celebrities were invited to the new Apple store and they have a good time on trying out those Apple’s product! 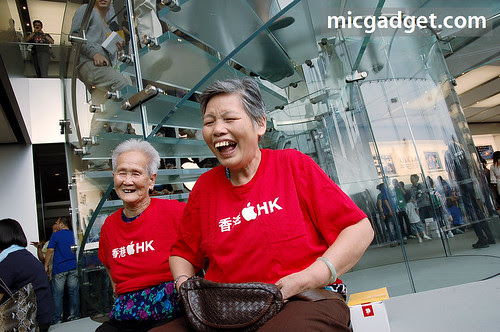 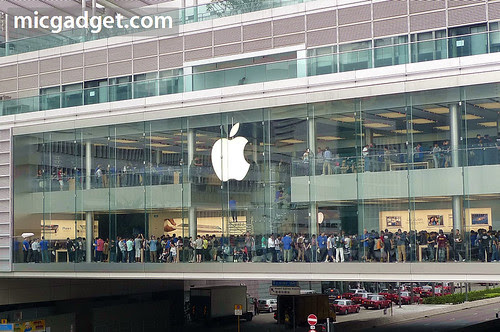 During the first hour of business, the new Apple store was fully crowded, overpacked with anxious customer, and there were not enough room to walk about !

The opening of Hong Kong’s first Apple store is joined this week by the opening of Shanghai’s third (and China’s fifth) Apple store. Opening additional stores in China and Hong Kong is especially enticing to Apple since sales in the region increased tremendously last quarter. Apple’s retail foray into the lucrative Hong Kong market has been a long time coming. Hong Kong has become known as a shopping oasis for tourists, especially those from the China mainland. Luxury brands and electronics are generally substantially cheaper in Hong Kong than in China. Chinese customers regularly travel across the border to Hong Kong to purchase Apple products. Apple opened its first retail store in Hong Kong as part of an effort to continue its storied revenue growth in the Greater China region. 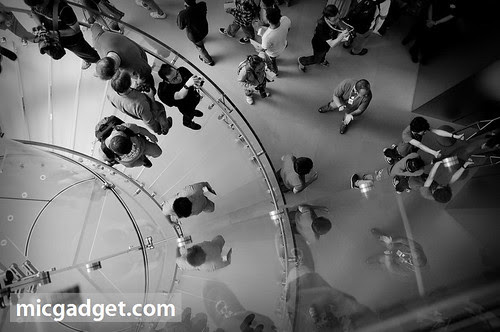