Posted by: Prices - Android, CHINA TECH, Meizu, Meizu vs iPhone, Meizu vs Xiaomi
Straight after the leaked shots this morning, Meizu has unveiled its next flagship Meizu MX smartphone, which comes earlier than what they originally promised. But anyway, we are glad to see the unveil of it, and we managed to compare the machine against two other popular smartphones — Xiaomi Phone and iPhone 4S. We are looking forward to see your thoughts. 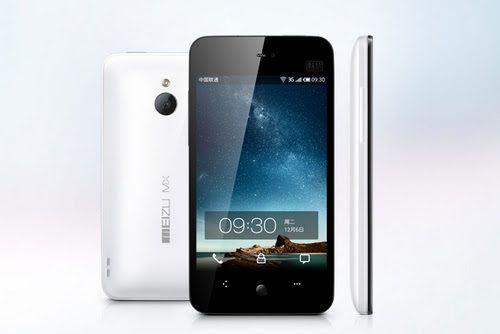 The two versions of Meizu MX — the dual-core and quad-core model. But for now, Meizu had only announced one of them, and that’s the dual-core version which is going to launch in China on Jan 1st at $2,999 yuans ($470), Hong Kong is still expecting an early January release, this depends on when their new flagship store opens in Hong Kong. The quad-core model will launch a bit later. The machine packed a 4-inch 960 x 640 ASV display, 1.4GHz Samsung Exynos 4210 dual core chip, 1GB of RAM and 16GB of storage will be on board, 0.3 megapixel front-facing camera, a secondary mic for noise cancellation and a 1,600mAh battery. As the concept shots indicate, Meizu has changed its home button design to a circular physical home button instead of an optical trackpad. That’s something that we feel quite disappointing with. 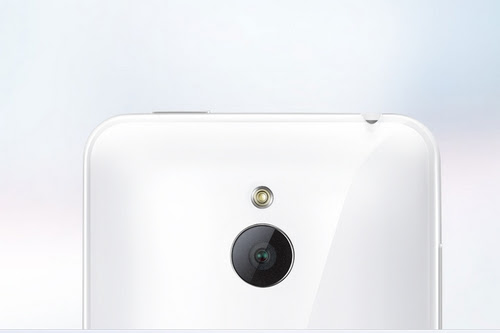 What’s more? Meizu MX equipped an incredible 8-megapixel rear-facing shooter with an f/2.2 lens, featuring a backside-illuminated sensor that makes no worry for 1080p video at 30 frames per second. Also, it is built with smile detection and panorama shot. Certainly attractive. 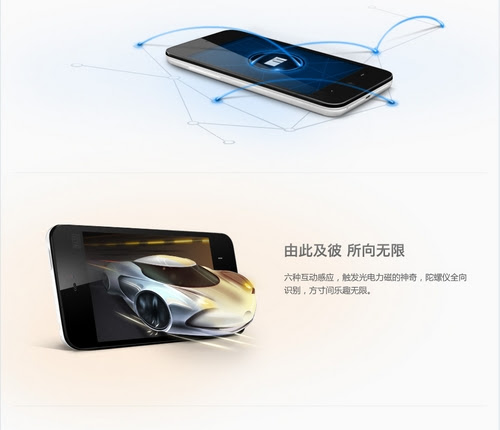 The 10.3mm-thick MX will have pentaband 3G with HSPA+, with theoretical download speeds of up to 21.6Mbps, all you need is a Micro SIM to get the phone working. It will come with a Micro USB connector, which can also served as a S/PDIF output, and supporting USB host and MHL as well. 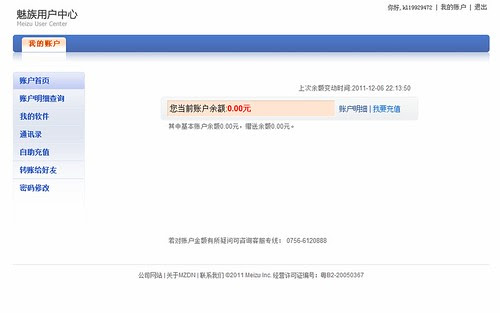 Flyme OS printscreen
That’s not it. We still haven’t talk about the OS. It will run a customized Android 2.3.5 Gingerbread, which dubbed Flyme OS, which is powered by cloud-computing technology (You may check out more printscreens here). Flyme allows users to store their apps and contacts at there, it will keep a record of all your online mobile payment history plus offering auto-online recharge with Alipay supported.

The CEO of Meizu Jack Wong has promised the device will be receiving an Ice Cream Sandwich update, and said they are trying their best to customize it like what they did on Android 2.3.5. However, he failed to give a specific timeframe. 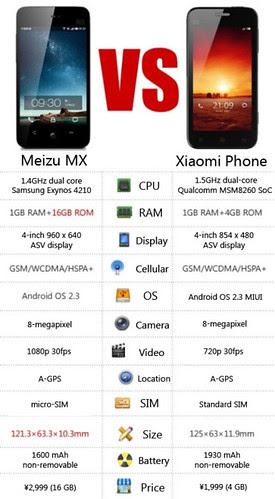 Of course, we have to compare Meizu MX with the cheapest Android smartphone in China — Xiaomi phone! Meizu MX has more storage, a higher resolution display, better quality of video playback and thinner body. In contrast, Xiaomi has a better processor, longer battery life, and it is more affordable. With the date of launch, Xiaomi will be accept orders from everyone on the Dec 18th, where Meizu MX will put on shelf two weeks later. The price and the time of launch are the two critical disadvantages for Meizu to compete with Xiaomi. 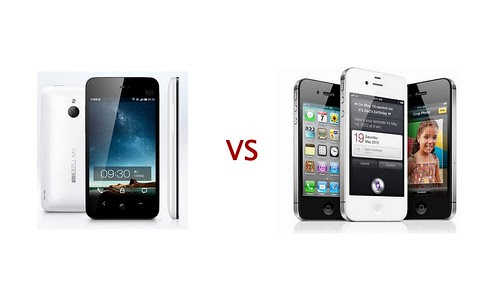 So how about battling with Apple’s most amazing iPhone? First of all, Meizu has a faster processor and more RAM than iPhone 4S, theoretically it would run faster and smoother. In terms of the camera, Meizu is surely the winner. The awesomely cool f/2.2 aperture lens that equipped on MX’s back has a great control over the image brightness in comparison to iPhone 4S 8mp f/2.4 camera. The down side? Meizu MX features a 4-inch 292 ppi Sharp ASV display, while iPhone 4S packed a 3.5-inch 326 ppi multi-touch screen.

Although Apple still hasn’t officially sell iPhone 4S through Chinese Telcos, there are already batch of 4S are floating around in China, where most of them were priced much more expensive than what it should be. At the moment, Meizu is still having a great advantage in price. But once iPhone 4S to be introduced by China Unicom, then the advantage that Meizu had will significantly reduce. But overall, Meizu MX is looking better…

The unveil of Meizu MX comes very sudden, we are quite shocked. The specs and the look of it is not surprising, as we have got most of them previously. We do think Meizu MX is priced a bit expensive. But surely it is giving better specs than Xiaomi phone and iPhone 4S did. The built-in rear-facing camera is very impressive, we believe it is going to draw a lot of female customers for Meizu. Another great thing about Meizu MX is the pentaband 3G with HSPA+, the incredible download speed would be something that get people paying for it. Among its rivals, we deduce the launch date is a crucial factor in both cases. The date that Meizu launched is not too late, but just enough to be a disadvantage.
Share this
Newer Post Older Post Home