Chinese pirates have taken downloading cracked iPhone and iPad apps to the next new level. A new desktop software called “KuaiYong” (literally means “use quickly” in Chinese) will allows pirated iOS apps to be installed on non-jailbroken devices. It has been around on Chinese internet world since June 2012, being only in Chinese seems to have caused the software to go under Apple’s radar for so long. KuaiYong is basically using bulk enterprise licensing to bypass Apple’s safeguards.

So the Chinese service is essentially distributing the exact same app – with the same license ID – over and over again. And now the same team has launched a web version of its pirate iOS app store. The online store is full of pirated iOS apps and games available for free. It makes the service more accessible to potential new users who can browse the available apps in their web browser. To download one of the iOS apps or games from the site, it’s actually downloading the “KuaiYong” PC software …

The pirate iOS app store over at 7659.com seem to be using a geolocation detect to hide itself from those outside of China. So, only user within China will see the store. For those outside of the nation, you’ll either see an error message or it’ll just redirect to the KuaiYong official homepage. So far we can access the site over here in Hong Kong. Aside from this new web store, KuaiYong is planning to launch its piracy-pimped iTunes alternative app internationally, a English version only for Windows user will be available soon. The team behind the pirate service claimed that they have five million users, and listed some righteous notice on their website. They indicate that most Chinese Apple users are not familiar with iTunes system and how to effectively manage it. So they developed its own method of giving users access to thousands of free apps without having to jailbreak their devices. They further pointed out the number of jailbreak in China has started to decline is because of the introduction of their KuaiYong software. In the mean time, English-speaking user can find some instructions guide (link removed) in order to use the Chinese service. 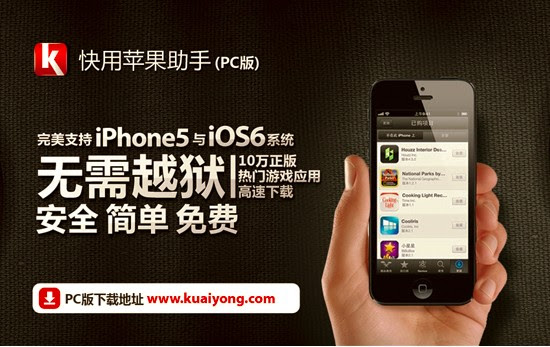 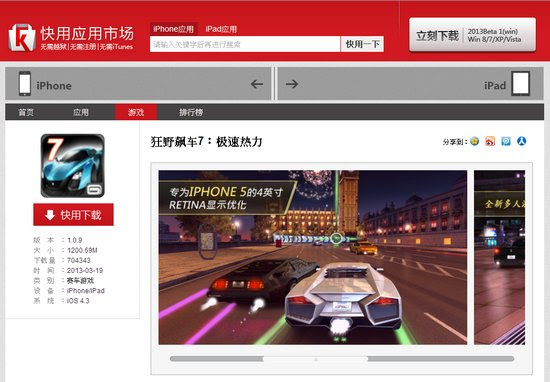 A game page on the new pirate store.
Actually this might be a good way for KuaiYong to distribute malware to iOS devices. Specialized malware could be developed for certain popular apps that collected information and logged activity on to the device. The Android eco-systems in China are working in this way. And there’s a strong likelihood that whatever the pirate team is doing is using illegally obtained licenses at the least, and credit-card fraud at the worst. It remains to be seen whether KuaiYong will be hit with a lawsuit from Apple.
Share this
Newer Post Older Post Home