You can buy a new iPhone with a 50% discount. Where do these prices come from? 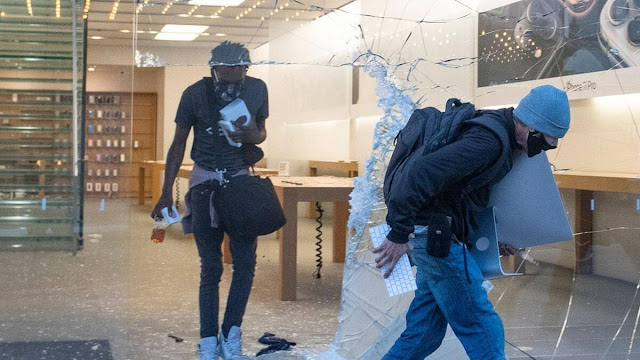 You can buy a new iPhone with a 50% discount. Where do these prices come from? Apple has blocked all iPhones 11 that were stolen from branded stores during the pogroms. In just a few days, looters stole several thousand pieces of equipment from Apple stores.
Thanks to the remote blocking, participants in pogroms will not be able to use stolen Apple devices. As soon as the thief tries to turn on the stolen gadget, they will see a message with the text " Please return to the Apple Store. This device is disabled and monitored. Local authorities will be notified."

Riots and clashes with police occur in more than ten major cities in the United States. The cause was the death of an African-American man, George Floyd, after being detained by police in Minneapolis. In the city itself, according to press reports, there are looting and pogroms. More than 200 buildings were looted, a state of emergency was imposed, and a curfew was imposed.

During these events, the black market greatly increased the supply of new iPhones that were stolen. Of course, sellers do not say that iPhones were stolen, but report that because of the pandemic, they do not have money, so they sell smartphones at a big discount. In fact, these are stolen phones that the buyer will not be able to turn on.

If you are planning to buy an iPhone 11 not in the official store, we strongly recommend reading this recommendation - How to Check If You're Buying a Stolen iPhone 11
Share this
Newer Post Older Post Home